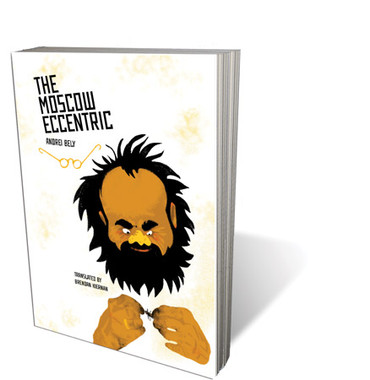 This newly rediscovered gem of a novel by one of Russia’s finest writers explores some of the thorniest issues of the early twentieth century. And reviewers have hailed the translation as "a coup" and "a remarkable achievement."

An absent-minded professor and a glamorous yet bumbling spy struggle over a powerful secret formula in this tale filled with eccentric personalities, wild dialogue, improbable sounds, bristling images and vivid colors.

In The Moscow Eccentric, Andrei Bely challenges readers not only with his ideas, but by presenting them in a what he called an “epic poem in prose format.” Built on a rhythmic backbone of metered prose that supports a wondrous array of literary devices, both poetic and prosaic, Bely’s language play is breathtaking. He is as brilliant on a huge canvas depicting spectacular swaths of city life as he is in detailing the patterns of snow on a small stretch of sidewalk. He surprises and thrills readers with constant tonal and stylistic variation, moving effortlessly from lyrical descriptions of nature to slapstick physical and verbal parody of Russia’s social milieu.

Brought into English for the first time by award-winning translator Brendan Kiernan, and peppered with original illustrations by Katya Korobkina, this is a stunning, poetic, and powerful novel by the author of Petersburg, which Vladimir Nabokov called one of the four best novels of the twentieth century.

“...a gem of a translation based on an in-depth appreciation of Bely's unique stylistic elements that shaped the original... This gift of translation retains the basic plot and characters and replicates the sound creating an English equivalent in Russian.... This is a bold, courageous, daring, and brilliant translation.”

“Andrei Bely is often discussed in the same breath as Joyce; that alone ought to give Anglophone readers some sense of the difficulty his translators face. Brendan Kiernan not only recreates the intricate texture of Bely’s prose, but also approximates its rhythmic undulations.  We bound after the absentminded Korobkin, the self-important Zadopyatov, and the nefarious Mandro with a strange mix of heightened concentration and reckless abandon.  The Moscow Eccentric is a coup, and I hope we won’t have to wait long for Kiernan’s renditions of its sequels.”

“Little known even to Russians, Andrei Bely’s The Moscow Eccentric is a virtuoso performance by one of the twentieth century’s prose masters. In this first translation of the work into English, Brendan Kiernan brings Bely’s effervescent style to life, using neologisms where Bely does and even retaining the distinctive rhythmic drive of the original. Copious notes alert the reader to untranslatable puns and other stylistic subtleties, while also supplying much-needed explanations of topical references and historical allusions. All in all, this is a remarkable achievement that will be valued by both scholarly and general readers.”

“The grotesque vignettes of pre-Revolutionary Moscow life – particularly that of its intelligentsia – constitute some of the novel’s most successful and dazzling passages. Moreover, with a cast of spies, provocateurs, prostitutes, rapists and perpetrators of incest, the novel does not want for sensational episodes and dark intrigue… A delirious Gogolian caricature attended by disturbing scenes that recall the demonic visions of Bosch and Breughel…. An important and intriguing work, a decadent Silver Age curio quite unlike the frothier literature of its day.”

Andrei Bely (1880-1934), born Boris Nikolayevich Bugayev, lived in Moscow and became a novelist, poet, and literary theorist and critic. Vladimir Nabokov ranked Bely’s Petersburg one of the four best novels of the twentieth century. Bely’s prose and poetry were deeply influenced by both his theoretical constructs and, unusually, empirical analysis of his own and others’ work. Bely lived and worked in both tsarist and Bolshevik Russia, and, like many of his contemporaries, spent some years traveling and living in Europe.

Brendan Kiernan is a freelance translator and political analyst. A student of Russian language and literature since 1977, he earned his bachelor's from Williams College and his Ph.D (in Political Science) from Indiana University, Bloomington, as well as an area studies certificate from IU’s famed Russian and East European Institute. He is the author of The End of Soviet Politics (Westview). His translation of Vladimir Gilyarkovsky's masterpiece Moscow and Muscovites Moscow and Muscovites won the 2015 AATSEEL Prize for Best Translation of a Scholarly Work into English.