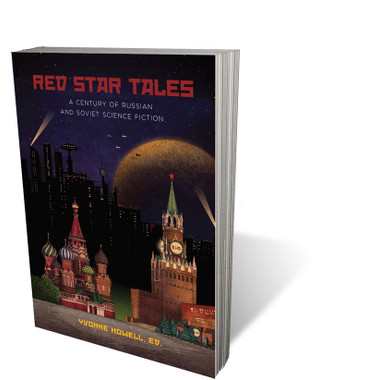 For over a century, most of the science fiction produced by the world’s largest country has been beyond the reach of Western readers. This new collection aims to change that, bringing a large body of influential works into the English orbit.

A scientist keeps a severed head alive, and the head lives to tell the tale… An explorer experiences life on the moon, in a story written six decades before the first moon landing... Electrical appliances respond to human anxieties and threaten to crash the electrical grid… Archaeologists discover strange powers emanating from a Central Asian excavation site… A teleporting experiment goes awry, leaving a subject to cope with a bizarre sensory swap… A boy discovers the explosive truth of his father’s “antiseptic” work, stamping out dissent on distant worlds…

The last 100 years in Russia have seen an astonishing diversity and depth of literary works in the science fiction genre, by authors with a dizzying array of styles and subject matter.

This volume brings together 18 such works, translated into English for the first time, spanning from path-breaking, pre-revolutionary works of the 1890s, through the difficult Stalinist era, to post-Soviet stories published in the 1980s and 1990s.

"This is an impressive and ambitious anthology that reflects an admirably high quality of editorial skill and translator acumen. It is a clear marriage of pleasure and academic rigor as practiced by an estimable group of scholars and translators.... a singularly enjoyable and scholarly book that should serve as a gateway to Russian science fiction for readers of every stripe"

"Red Star Tales is a labor of love by some of the top scholars and translators of Russian and Soviet science fiction… Howell’s introduction… is highly accessible to the non-specialist and, at the same time, an invaluable resource for the Russian scholar who may be new to science fiction…. The translations are excellent, and the book as a whole is carefully edited… One can only hope that the appearance of Red Star Tales marks an upsurge in the teaching of Russian and Soviet science fiction. Equally important, this collection is a fun read and opens a portal onto a fascinating world of speculative fiction previously unavailable to Anglophone science fiction fans."

"Would this make the two hours before boarding a plane, or an afternoon at the beach or such summer vacation destination enjoyable? The answer is yes, quite so… Toss it in your summer bag/gym bag/soccer practice/honor bang hangout bag and enjoy the trip to different realms of the universe. You will even enjoy contemplating switching your vision with your hearing and vice versa!"

"None of the 18 stories included in the collection has ever been translated into English until now, and because of this book we can truly appreciate the dramatic and dynamic scope of Russian science fiction from the end of the 19th century, through the Soviet era, and into modern times…. by all means grab a copy of Red Star Tales. You’ll be glad you did."

Also be sure to get a copy of the poster!