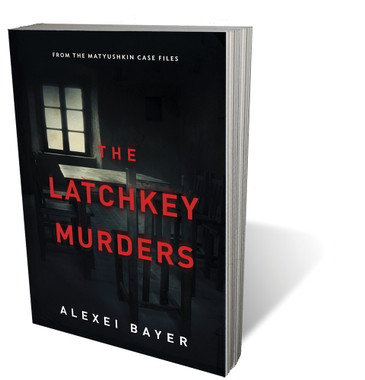 Senior Lieutenant Pavel Matyushkin is back on the case in this prequel to the popular mystery Murder at the Dacha.

A serial killer is on the loose in Khrushchev’s Moscow, rattling the foundations of the communist state (such anti-social crimes only occur in decadent bourgeois societies, after all).

The victims are as pitifully innocent as the crimes are grievous, and Petrovka 38 runs down one blind alley after another, while its most capable detective, Pavel Matyushkin, is distracted by a frivolous apparatchik.

With twists and turns aplenty, and rich with the atmosphere of 1960s Moscow, The Latchkey Murders is a page-turner you won’t want to put down.

The other two books in the series:

"Great detective story, very good description of Moscow in the 60s, charming characters. Enjoyed both books in the series!"

"Alexei Bayer is an exciting new Russian American thriller writer. As an emigre to the U.S. He really knows what the old Soviet Union was like."

"This is the second book in what I hope will be long series of mysteries set in the old Soviet Union, showing that people are people whatever the regime. They fall in love, they go to cafes and theaters, they bring up children, they chase down murderers, they have office issues with management. It's a delightful book."

About the Author: Alexei Bayer is a New York-based author, translator and, by economic necessity, an economist. He writes in English and in Russian, his native tongue, and translates into both languages. His short stories have been published in New England Review, Kenyon Review, and Chtenia. His first novel, Murder at the Dacha, was published in 2013.