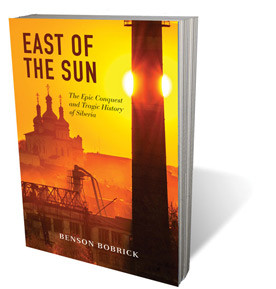 East of the Sun: Epic History of Siberia

The very word Siberia evokes a history and reputation as awesome as it is enthralling. In this acclaimed book on Russia’s conquest of its eastern realms, Benson Bobrick offers a story that is at once both rich and subtle, broad and deep.

From its conquest by Cossacks and its exploration and settlement in the sixteenth and seventeenth centuries, through its terrifying Gulag era, to its modern place in a world hungry for natural resources, Siberia – covering a sixth of the world’s surface – is a land unlike any other. East of the Sun captures all of Siberia’s history with a depth and flavor that will satisfy both well-informed historians and newly-cast Russophiles alike.

“Magnificent detail!, meticulous research... Bobrick’s thoughtful and comprehensive book, with its focus on the region’s political, economic and diplomatic role in Russia’s destiny, will reward any reader.”