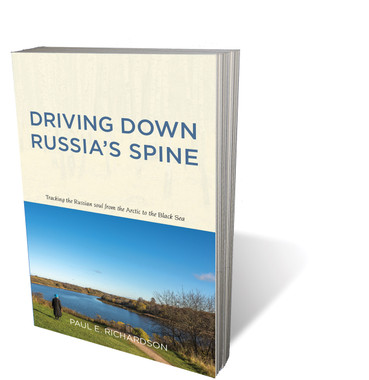 On one level, this book is the story of an epic 6000-kilometer road trip from the frigid shores of the Barents Sea to Sochi, Russia’s southernmost tip on the Black Sea. Dubbed "The Spine of Russia," the adventure tasked a mismatched duo of Russian and American journalists with capturing a view of Russia from the ground, to collect powerful images and honest human stories that offered a more subtle, complex picture of the world's largest country.

But this book is far more than just a travel essay. For it intertwines fascinating subject profiles with digressions into historical and cultural themes relevant to understanding modern Russia. It is a story told with humor and with the insight derived from the author’s three decades of intimate interactions with Russia.

Among the many interesting stories in the book:

There were also craft beer makers, ballroom dancers, policemen, restaurant owners, an opera student, a priest, a single mother, an accessibility activist, teachers, docents, a best-selling author, soap makers, journalists, a sailor, a winemaker, and a woman taking on the male-dominated world of Russian hockey. And no trip to Russia would be complete without a run-in with security officials in leather jackets. So there is also that.

Taken together, the stories from this epic road trip create a compelling portrait of  Russia and its people. The book could not be more timely; recent events show how vital it is for Americans to continue working to understand Russia.

Includes no photos (for that, see The Spine of Russia), but it does include a map of the journey for reference.

Also available as an ebook.

"Richardson’s observations and conversations are profound and pragmatic, nuanced and varied. He probes Russia’s unknowable mystery... Richardson’s colloquial style makes him an easy-going companion... His historical asides are entertaining and his digressions range from potato farming to the building of the White Sea canal... a rich and varied portrait of life in Russia..."

"Richardson... knows his Russian history and relies on it in presenting a unique perspective on this fascinating country. Encounters with colorful Russians of all stripes enliven his engaging read."

PAUL E. RICHARDSON is a journalist and publisher. Editor of Russian Life magazine, he has authored and edited numerous books of fiction and nonfiction focused on Russia. He lives in Vermont.

The Spine of Russia (02:40)
Published on Jun 24, 2016 Russian and American journalists Mikhail Mordasov and Paul E. Richardson traveled 6,000 kilometers from Russia’s northwestern corner in the Arctic to Sochi, in the tropical climes along the Black Sea. They collected over 3,500 photos, recorded over 100 hours of interviews, and penned 100,000 words. Their epic journey is captured in two pathbreaking books: The Spine of Russia & Driving Down Russia's Spine. The Spine of Russia is a 200-page, museum quality, hardcover photo book that is entirely bilingual (English and Russian). It is a vivid portrait of modern Russian life, and includes over 40 environmental portraits of “heroes” interviewed in depth by the journalists (each of whom was asked their definition of patriotism). Organized in a unique, non-linear style to allow readers to construct their own trip across Russia, this is a volume you will treasure for years to come. Driving Down Russia's Spine is a 330-page travel essay book that includes the full story of the trip, intertwining fascinating subject profiles with digressions into historical and cultural themes relevant to understanding modern Russia. It is a story told with humor and with the insight derived from the author’s three decades of intimate interactions with Russia. You can read a sample story here. To get your copies, visit http://spineofrussia.org